Microplastic in Sediments from the Arctic to the Tropics

Several estimates have indicated there are likely orders of magnitudes more plastic litter and microplastic on the sea floor than on the sea surface; however, there lacks actual data to verify this. There further also lacks a general understanding of the processes by which microplastic sinks. It is the objective of this work to better survey the presence of microplastics in diverse oceanic environments, as well as to better understand the weathering and sinking processes that can cause microplastic to sink and accumulate in sediments.

Column experiments were performed to measure sinking rates for diverse pristine and weathered microplastic particles at different temperatures and salt conditions. The results, as well as similar studies from the literature, were compared with a recently developed model based on the drag coefficient and the Reynold's number, which can be used to generalize the effect of different seawater and microplastic particle changes with weathering under still conditions. Further, a novel, efficient method to quantify microplastic in sediment, based on density separation followed by chemical digestion, has been used to quantify microplastics in benthic sediments from sampling areas that cover large scale geographical areas, including the Norwegian Continental Shelf and the coast of Havana.

Relatively high quantified concentrations of microplastics in the studied sediment samples were observed, agreeing with expectations there are orders of magnitude more microplastic in sediment than on the sea surface.  Many microplastic consisted of low density polymers, which can sink to the sea floor due to weathering processes like aggregation with weathered algae. These field observations, as well as the model in development to account for the sinking behaviour of microplastic under weathering, are further steps in understanding how the vast majority of microplastic most likely ends up in the sediment. 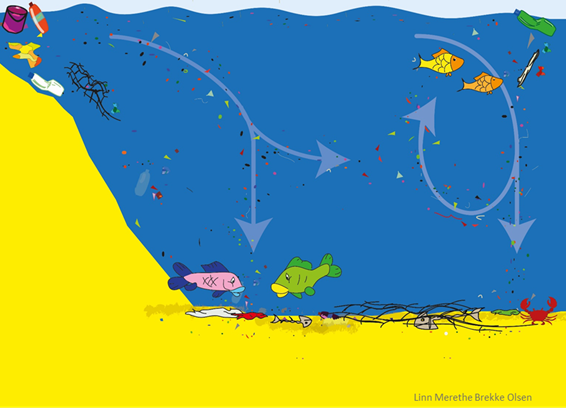